Following a huge two-night affair this past weekend in Atlantic City, New Jersey for Homecoming, Game Changer Wrestling (GCW) is back at it to kick off August this coming Sunday with Keep In Touch, which marks their return to Indianapolis, Indiana after June’s debut with The Wrld on GCW, Part 2, also returning to the Celebration Plaza Amphitheater at the White River State Park. GCW Keep In Touch is airing live on FITE.tv on Sunday at 5pm EST. Following some huge GCW debuts of late, such as Major League Wrestling‘s Calvin Tankman and former ROH/NXT Superstar ACH, GCW has two more huge debuts on Sunday, as IMPACT Wrestling‘s Kylie Rae and Ace Austin are both set to make their GCW debuts! In sad news, GCW’s top star, Nick Gage, has had to be pulled from the card (initially set to face Cole Radrick) due to injuries sustained last weekend during Homecoming weekend (speculated to have occurred at Beyond Wrestling‘s Two Weeks Notice show directly before night two of Homecoming), and as usual, GCW World Champion Rickey Shane Page and his 44OH crew are taking claim for taking Gage out.

The clock is ticking 44OHpic.twitter.com/mVb3LPnkUM 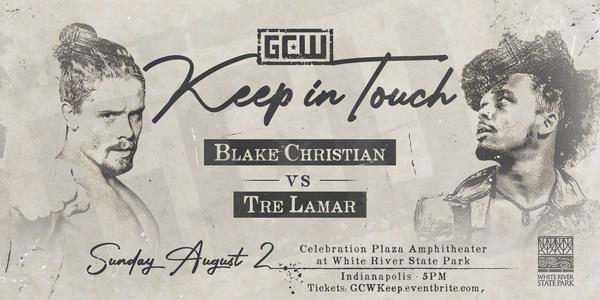 Two of GCW’s most exciting young stars will compete in what will surely be a high flying and athletic contest. It’s been just over a year since Blake Christian debuted with GCW and in that time the Southern indie star has exploded into one of the most “must-see” young talents in the US indies – his series of matches with Alex Zayne have been absolute classics. His opponent, Tre Lemar, has been a rising star in the Midwest scene, primarily with Absolute Intense Wrestling (AIW) in Ohio and Black Label Pro in Indiana, but he made his debut with GCW at The Wrld on GCW, Part 2 and immediately became a star with the company. Since then he’s had a barn burner with ACH at Homecoming, Part 1 last Saturday, and then at Homecoming, Part 2 on Sunday, he was in a hellacious Scramble that was ultimately won by Christian. These two are now going to face off one-on-one in what could be a darkhorse for the match of the night. 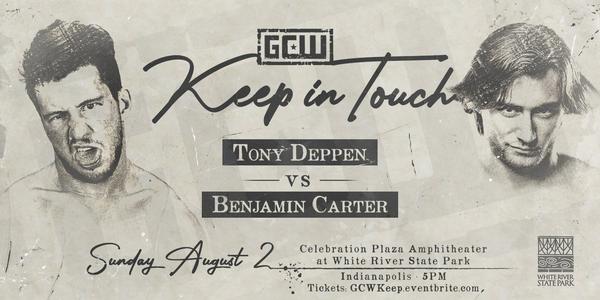 Tony Deppen has long been one of GCW’s top Gatekeepers, the gold standard that young or incoming stars must get through before they’ve earned their spot on the GCW roster. On Sunday, he’ll take on that role again as he faces one of the breakout stars for GCW in 2020 in the UK’s Benjamin Carter. Carter came to the US on a football (soccer) scholarship to further his wrestling career, training under WWE Superstar Seth Rollins at The Black & The Brave Academy, and last year really showed what his athleticism was capable of. He made his GCW debut this past spring in the Acid Cup 2, where he lost first round to Blake Christian and has since been a part of multiple Scrambles. This is first proper singles match where he can show his goods and its against one of GCW’s top wrestlers. 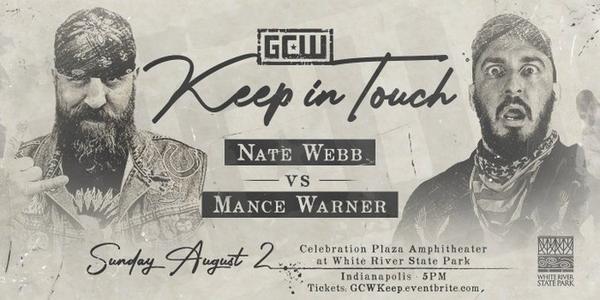 Indiana’s own “Spyder” Nate Webb is a veteran of the hardcore wars and on Sunday he’s back in a GCW ring to take on one of GCW’s biggest stars (thanks in part to his work with MLW) in Mance Warner. Webb has been on the losing end of most of his matches in GCW in 2020, losing to EFFY, Nick Gage, and GCW World Champion Rickey Shane Page so far, but he pulled off a huge win in a lengthy battle against new AEW star Ricky Starks this past January in Texas. He’s going to need a big win to stop the naysayers from insinuating he’s “gone soft” since becoming a cooking show star on IWTV. Warner is also on a bit of a losing streak in 2020 in GCW, losing to Page, Tony Deppen, Allie Kat, and Chris Dickinson, so he’s also going to want a big win to get back into contention. Both of these men are fighters to the core and this one will get violent. 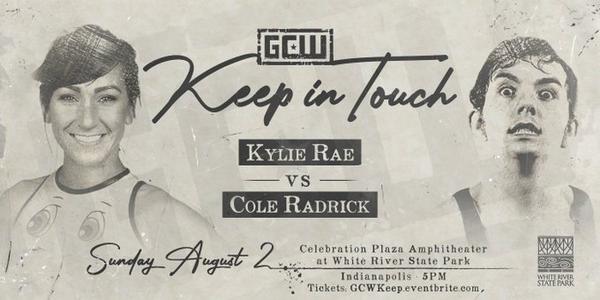 Kylie Rae makes her GCW debut on Sunday night, but the reigning #1 Contender for Deonna Purrazzo‘s IMPACT Knockouts Championship is no stranger to getting down and dirty in intergender match-ups. Earlier this year, she defeated AJ Gray for the Black Label Pro Midwest Championship, and she’s gone toe-to-toe with the likes of WARHORSE, Ethan Page, Tony Deppen, and GCW World Champion Rickey Shane Page in the recent past. This Sunday it’s Indiana’s own Cole Radrick who is stepping into the ring to face her. The 22-year old Radrick is a staple in the hot Indiana indie scene, as a former Paradigm Pro Wrestling Champion, and he made his own GCW debut this past January at GCW I Can’t Feel My Face. Apart from a singles loss to KTB in the first round of the Acid Cup 2, all his matches have been Scrambles, Clusterf**ks, and multi-man tag matches, but his last appearance, at GCW Backyard Wrestling 2 on July 4, saw him on opposite teams of Nick Gage. While the Gage-led Yard Legends defeated Radrick’s team of New School Yarders, Radrick took several liberties with Gage in an attempt to get himself known in GCW. Not only did GCW notice, but so did Nick Gage himself, and a grudge is ready to be settled. That grudge will have to wait for another day, as Radrick now finds himself going one on one with Kylie Rae. But at least Kylie Rae has shown she’s “gang affiliated” and will be heading into the fight to represent Nick Gage proudly. 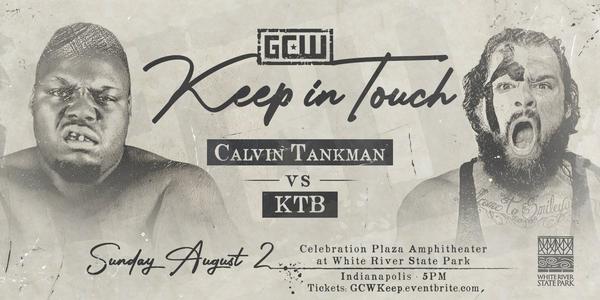 Calvin Tankman finally made his long-awaited GCW debut in June at The Wrld on GCW, Part 2 after initially scheduled to debut over WrestleMania Week at #ForTheCulture (which was sadly postponed due to the COVID shutdown). Since then, he’s signed with MLW, but the big man has made an impression early, winning back to back Scrambles, followed by a hard-hitting affair with Chris Dickinson last week at Homecoming. He’s set to face former GCW World Champion KTB this coming Sunday, another fitting showcase for Tankman’s abilities. KTB is no slouch either, and a highly underrated big man who is more than just your average “hoss”. Both men have explosive athleticism that can come from nowhere, so this should be a great battle between two heavy-hitting brawlers. 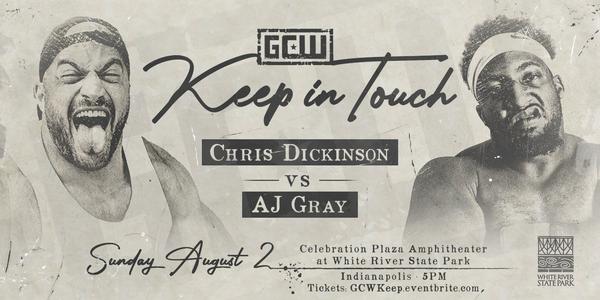 Chris Dickinson has been an absolute monster in GCW since it rebranded in 2015, and last year he was easily the MVP of the US indies. He’s been undefeated on US soil in GCW since the beginning of the year, with wins over the likes of Alex Zayne, Jimmy Lloyd, Sanchez, Shane Mercer, Allie Kat, Mance Warner, 1 Called Manders, and most recently, Calvin Tankman (his only two singles losses in GCW this year happened in Japan to Daisuke Sekimoto and Yuji Okabayashi). While he’s probably the odds on favorite in his encounter with AJ Gray, Gray isn’t someone to be taken lightly – this past December, it was AJ Gray who ended Nick Gage’s 722-day run as GCW World Champion, and in 2020, he’s scored big wins over Chris Bey and KTB in GCW, and just came short in his recent deathmatch against Alex Colon at Homecoming. Gray has become one of GCW’s most reliable fighters and this is a great testing ground for both competitors to cement their status in the GCW main event. 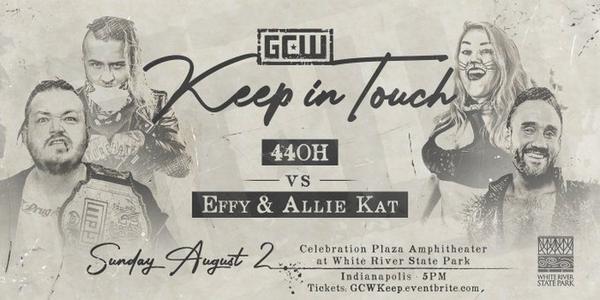 GCW World Champion Rickey Shane Page is once again avoiding defending his Championship, this time heading into tag team action alongside his 44OH protege Atticus Cogar. The whole roster is firmly behind Nick Gage in his nearly year-long feud with Page, and on Sunday, the team of Allie Kat and EFFY will unite to try and humble the World Champion and his own little Salacious Crumb. Allie Kat and EFFY are only a year into their GCW careers, but both have been impressive in their fearless approach to taking on all comers, and on Sunday they unite to take down the World Champion. 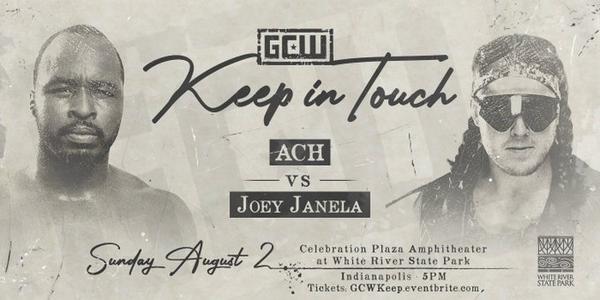 ACH made his spectacular GCW debut last weekend during Homecoming, picking up victories over Tre Lemar on night one and then KTB on night two. Heading into Sunday 2-0 in GCW, ACH is stepping in the ring with AEW star (and GCW veteran) Joey Janela for a huge match, as ACH looks to reclaim his legacy in pro wrestling after a controversial departure from WWE last winter. Janela can work with anyone, from Kenny Omega to an Invisible Man, and a big match like this against an opponent in ACH will continue to show just what the “Bad Boy” can do.

Stay tuned to the Last Word on Pro Wrestling for more on this and other stories from around the world of wrestling, as they develop. You can always count on LWOPW to be on top of the major news in the wrestling world, as well as to provide you with analysis, previews, videos, interviews, and editorials on the wrestling world. GCW Keep In Touch airs on Sunday night at 5pm EST live on FITE.tv.