It is that time of the year again for Stardom fans as the company gets set to run their annual 5STAR Grand Prix.  This round-robin tournament pits the top performers of Stardom against one another in two blocks with the block winners facing off at Korakuen Hall.  With this primer, we’ll get you up to speed with the competitors and maybe make some predictions 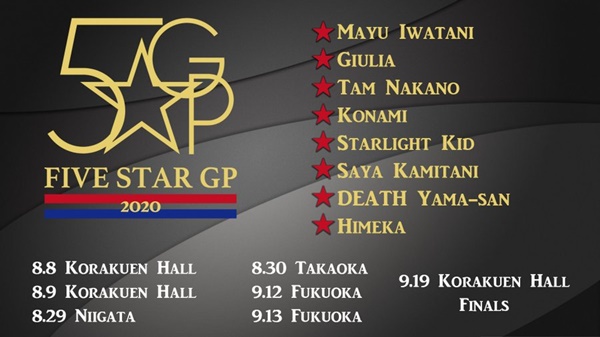 The current world champion, the icon of Stardom and easily the most recognizable performer in the company Mayu Iwatani has a strong case to win the tournament despite going in as champion.  This would mark the first time the 5STAR GP winner would hold the World Of Stardom championship at the same time.  The rationale behind this choice is that Iwatani winning and getting to choose her challenger, possibly for the 10th-anniversary show in January, could make for a one-off match with an outside name, like Takumi Iroha who holds a win over Iwatani, or even a return match for Kairi Sane.  Winning the GP while holding the title has never been done before but we wouldn’t put it past Mayu Iwatani to make history.

Since debuting in December 2019 Giulia has taken Stardom by storm.  Following a rather controversial jump from Ice Ribbon, she hit the ground running, leading her own new faction (Donna Del Mondo), competing at the Tokyo Dome, winning the Artist Of Stardom Championships, winning Cinderella Tournament, and then last but not least capturing the vacant Wonder Of Stardom champion.  Stardom has quickly become Giulia’s company and she is pushed to a level we have not seen since 2018 Momo Watanabe who was absolutely bulletproof before losing her title.  Unbeaten in singles competition it wouldn’t be shocking to see Stardom have her win the GP as well to rubber-stamp this debut year of dominance.

Nakano has just come up short in her challenge for the Wonder Of Stardom championship but is also in the midst of a push to fill the gap left by Arisa Hoshiki in STARS.  She isn’t likely to win but it should be expected she will get some big wins to boost her status.  She will also be desperate to beat Giulia in their rematch and may just get the win to end Giulia’s unbeaten streak.

Konami comes into the tournament off of two big losses, first, she was beaten by Giulia in the tournament to crown the new Wonder champion, then she and Jungle Kyona failed to re-gain the Goddesses Of Stardom tag team championships.  While she was the runner up in this tournament last year it’s unlikely we see the same performance by Konami.

Starlight Kid makes her tournament debut in the 5STAR Grand Prix 2020.  The first ever Future Of Stardom champion has long been tipped for success in Stardom and her performances in this tournament will go some way to showing us how high her ceiling is.  In a recent tweet owner Rossy Ogawa stated that Kid had advanced from her child role following the High Speed title match at Stardom Cinderella Summer In Tokyo.  That means we’ll finally see her begin to get the push Stardom wants her to have and this tournament will go a long way to giving us an indication of where she stands in STARS and the company.

Kamitani is also making her tournament debut this year, just under one full year after her debut.  Since debuting it’s been clear that Stardom has high hopes for Saya Kamitani as she won the Rookie Of The Year 2019 tournament and was very quickly picking up wins against her fellow rookies.  Her recent Goddesses title win was just the cherry on top of a good debut year for the 23-year-old.  She has a tough block but this tournament will provide a good indication of her spot on the card.

Despite the gimmick and comedy DEATH Yama-San, the former Kaori Yoneyama, is a very accomplished performer.  She is a former High Speed champion as well as a multiple-time Artist Of Stardom Champion.  While she will likely lose more than she wins it wouldn’t be a shock to see her use her high speed prowess to gain one or two surprising wins.

The most recent debutant in the tournament Himeka debuted for Stardom on their first show back following their break.  The former Actwres girl’Z competitor has made an instant impact picking up a number of wins and forming a tag team with Syuri.  Given how new she is to the company Himeka is a very fresh addition to the tournament and given her size they may give her some big wins to continue building her up. 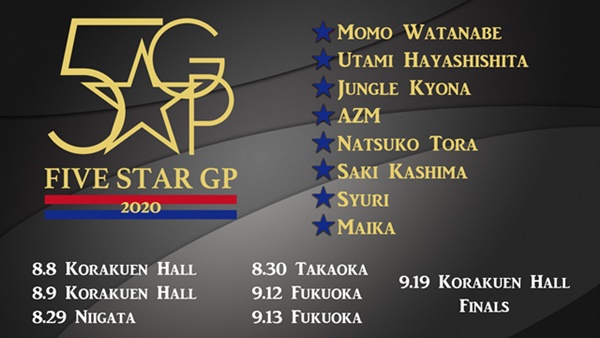 The leader of Queen’s Quest and the longest reigning Wonder Of Stardom Champion in history Momo Watanabe has not been the same since losing her championship.  While she is no longer the unbeatable champion of Stardom she is still one of its most fearsome competitors and this block draw presents her with a number of interesting matches.  She will face former tag team partner Jungle Kyona as well as her second in command in QQ Utami Hayashishita.  Watanabe is still credible enough that she could easily win or at least make the finals but it doesn’t seem like Stardom is interested in pushing her as hard as they once did.

The former “super rookie” Hayashishita took Stardom by storm after her debut in August 2018.  She made it to the finals of the 5STAR Grand Prix mere weeks after her debut and would go on to win a number of championships, at one point holding five (YES 5) different titles at once.  Her initial momentum fizzled out as she lost those titles one by one but she has remained one of the top competitors in Stardom and recently regained the Goddesses Of Stardom titles.  Hayashishita is another performer with a big future in Stardom and they could pull the trigger on her winning the GP any time they want, that may not be this year, but it will happen.

Jungle Kyona comes into this one off the big of two big losses in title matches.  First, she came up short in her home town of Nagoya against Mayu Iwatani, then she failed to regain the Goddesses Of Stardom championships.  It’s almost a no brainer to push Kyona to the top of Stardom but the company seems to think otherwise.  The block draw has not been kind to Kyona as she is matched up with three different rivals (Hayashishita, Watanabe & Natsuko Tora) so this may not be her year either.  The de facto leader of Tokyo Cyber Squad will finish high in the block but given her tough opponents, she isn’t likely to win.

The new High Speed Champion AZM made her debut in the 2019 GP as a replacement for Kasey Owens.  She ran with that opportunity and had a very impressive showing in the tournament.  Now a singles champion at just 17 she, like Starlight Kid, has progressed beyond being seen as a child competitor and is ready for her proper push.  With her debut of new gear and a new theme the new and improved AZM could be about to make a big showing in this tournament.

The leader of Oedo Tai has reveled in turning the faction back into the dastardly heels of old.  She doesn’t care about how much damage she does to her opponents she just wants to win.  While she has yet to gain many big singles wins she has been performing well and getting over despite her booking.  This tournament could be a great place to heat Tora up and give her a number of big wins and maybe even a spot in the finals.

Since joining Oedo Tai Kashima has developed a bit of a mean streak, she hasn’t lost the ability to pull off upset wins either.  She was the first person in Stardom to pin Giulia after all.  While she never gets a big push she always pulls off surprise wins in the GP thanks to her revival finisher.

Syuri debuted for Stardom earlier this year as the third member of Donna Del Mondo.  She has brought her brand of hard hitting pro wrestling to Stardom and has achieved some success in her short time with the company.  So far she has been kept fairly strong in Stardom not losing all that often and given she is facing Mayu Iwatani for the world championship in late August it’d make sense for her to be kept strong in this tournament.  That said, she probably won’t win as she is not contracted to Stardom and she already has a world title match coming up.

Stardom’s newest signee Maika makes her tournament debut here.  The double champion debuted last year for JUST TAP OUT but recently resigned from the promotion to join Stardom full time.  Despite her inexperience, Maika is a solid performer who uses a judo influenced style to really stand out from the stardom trainees.  Someone in Stardom likes her as she has already captured two championships and was very publicly courted by Giulia to be the first member of Donna Del Mondo.  She won’t win the tournament but getting to step in there with some of Stardom’s best, and renew her grudge with Hayashishita, will be a great learning experience for her.  She’s a fresh addition to the tournament and another who’s push will become clear as the tournament progresses.

And there you have it a rundown of all sixteen competitors in the 5STAR Grand Prix 2020 and where they stand ahead of the tournament.  While the tournament is tough to predict we feel like there’s a good chance Iwatani or Giulia walk away a winner, but Stardom has been known to pull from left field at times and any number of women could viably win.

Stay tuned to the Last Word on Pro Wrestling for more on this and other stories from around the world of wrestling, as they develop. You can always count on LWOPW to be on top of the major news in the wrestling world, as well as to provide you with analysis, previews, videos, interviews, and editorials on the wrestling world.  And make sure to subscribe to Stardom World to see all the action from the 5STAR Grand Prix 2020