With the recent announcement of the King of DDT competitors and Bracket. It would be a good time to give a look into each of the brackets and things to consider when watching them. As this is the second-largest King of DDT tournament with 28 people being involved in the tournament and two major wild cards are in play it would be best to look at things bracket by bracket going counterclockwise. Bear in mind in between now and then is a large show, some things could change, but as things stand today here they are.

Top Left Of The King Of DDT Bracket 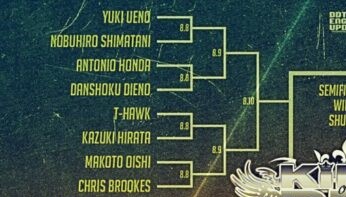 Starting off with the top-left bracket we have two major names that stand out. Chris Brookes and Yuki Ueno. Brookes having just won back the Universal title from Daisuke Sasaki, and just coming off his own produce show, is probably going to continue his wave of momentum going into this show. Though as he is facing Makoto Oishi in the first round an upset could occur and it wouldn’t be too surprising due to his recent alliance with Jun Akiyama and that loss would place Brookes in the Dramatic Challenge. At the same time, Ueno has been keeping up with the current KO-D Openweight Champion Tetsuya Endo and is facing him on July 23rd for the title. So this bracket is either going to Brookes or Yuki Ueno barring a major upset.

Bottom Left Of The Bracket 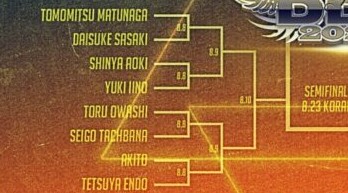 Next bracket over Tetsuya Endo has a tough first round with Akito but then a relatively simple path to the quarters as his opponents after that would be Toru Owashi or Seigo Tachibana both of whom are on cold streaks, Contrast that with his DAMNATION stablemate Daisuke Sasaki who once getting past a simpler first round would have to either beat the current Extreme champion in Shinya Aoki or ALL OUT‘s Yuki Iino. Which makes this one tougher to look at. Endo or Sasaki could all make it to the semis from this. There’s more than likely going to be some DAMNATION representation in the Semifinals. The deviation from a KO-D title shot and a money prize from a sponsor makes it tough as it gives Endo more viability.

Bottom Right Of The King Of DDT Bracket 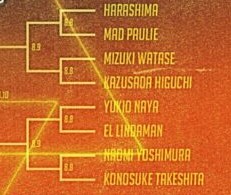 Next up has the 2019 winner in Konosuke Takeshita who will go deep, at least to the quarterfinals since he has extremely good luck in tournaments. However, if he’s going to make it to the semifinals is a rough estimation. HARASHIMA and Kazusada Higuchi are most likely to face off, and given that this will be after their KO-D Six-man title match it will be interesting to see which way that goes. Either one could win and either one could get the victory over Takeshita. Best guess would be Higuchi due to his ability to pull off big wins and holding victories over large names including Endo in singles competition.

Top Right Of The Bracket 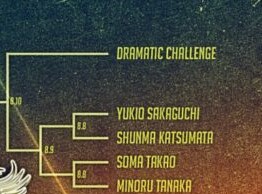 The final major bracket contains one of the wild cards in the Dramatic Challenge. That is a battle royal in which everyone who was eliminated in the first round is entered to earn a second chance. This kind of thing normally speaks to an upset, so a lot of the big favored names could be thrown in due to an early elimination. Of the people likely to win the battle royal who would have a chance at moving on Akito, Endo, and Brookes are all likely names. As for the confirmed matches, Minoru Tanaka returns having been mainly a BASARA name, but Yukio Sakaguchi will likely be the leader of this one given he is a former winner of the King of DDT tournament. With his only potential roadblock being the winner of the Dramatic Challenge if it’s someone major.

So now the names have been narrowed down to major contenders. Time for the other wild card the Semifinalists will be shuffled. So out of the major contenders, a lot of matches to continue rivalries could happen even leading into the finals. Even though this isn’t entirely for a direct title shot whoever pins Endo, if they do, will be rocketed to the honor of the next challenger, and that’s not mentioning the other champions in the King of DDT bracket. A lot of future title matches and paths could be decided at this event so if there was anything to keep an eye on this is it.